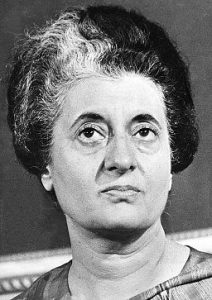 Mr Trump if you lack imagination as to how a woman could be the “boss” of the military, please read the history.

Indra Gandhi The first women prime minister of India had run the country to its glory in 1971 in the war against Pakistan. Under her leadership India tested and exploded a nuclear device in 1974. She waged an operation “Blue Star” 1984 to free the “Golden Temple” from the militants hold take down the Sikh terrorist group led by Jarnail Singh Bindranwale. In November of that year she was gunned down by two of her Sikh bodyguards.

Benazir Bhutto was the late prime minister of Pakistan, who was elected by the people two times.She lived in exile then returned to run for office through democratic process. She was brutally assassinated on an election campaign.They knew they will be killed brutally one day, still they faced the fear and the unknown enemy everyday while leading their people.

In 1979 Margret Thatcher becomes the first woman to become the prime minister of England. She won three elections ruled Great Briton and its people.These women were not worried about the opinions of Trumps and nay sayers. They believed in themselves and acted upon what they thought was good for their country
Many women protect this country in uniforms today. If given the chance I am sure they can run this country too.

Currently Queen Elizabeth II led the country’s children through a radio broadcast during world war II. She was only 14 then. In 1942 she inspected the troops. In 1945 She helped the war effort in the Auxiliary Territorial services.
Our country has many women in uniform protecting us everyday. Given a chance, they will rule the country just fine. You know what, Mr Trump, your opinion is a high value to you. It is not going to decide what is America to me. America is a great nation that deserves a woman president.
You want my vote, Mr Donald Trump,